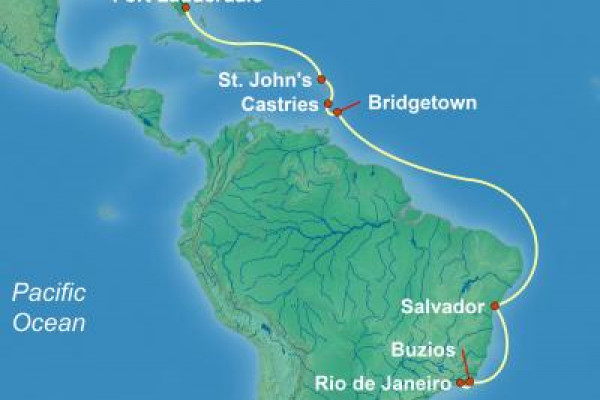 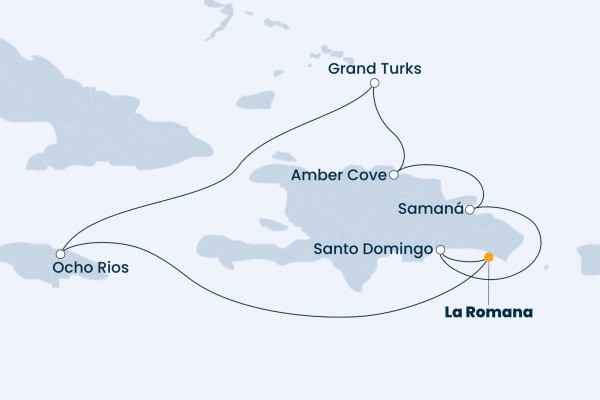 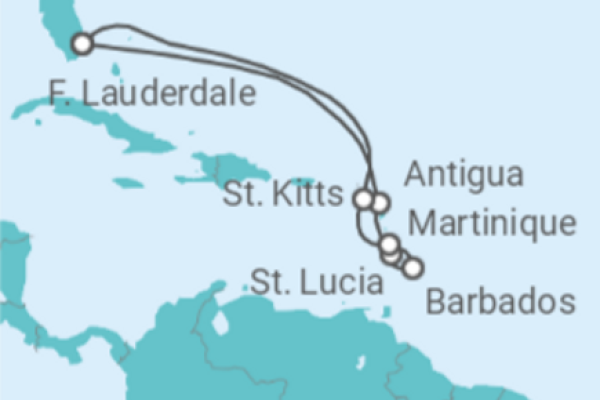 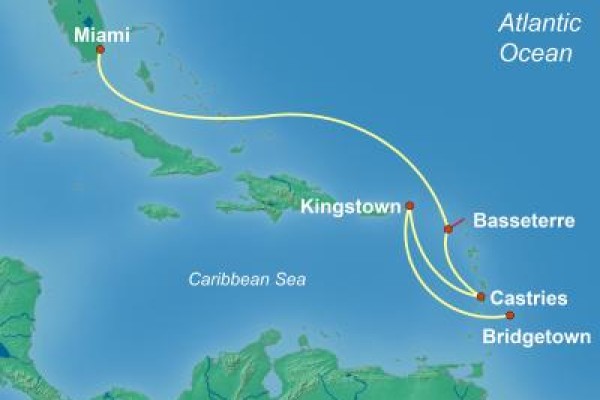 6 night cruise on Rhapsody of the Seas 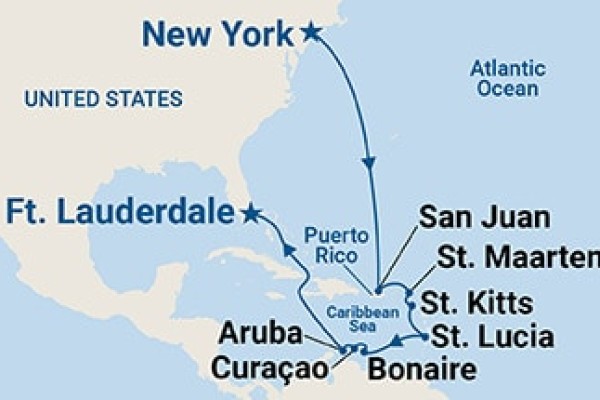 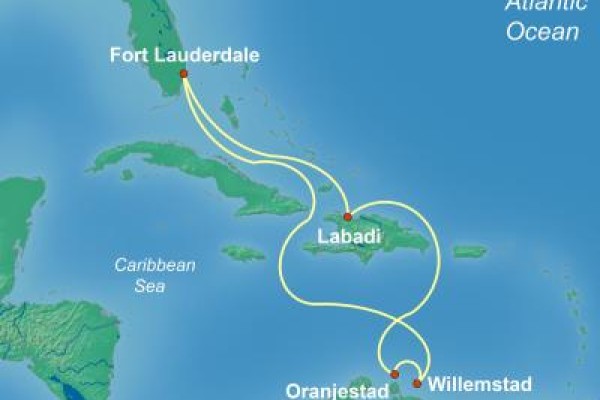 8 night cruise on Harmony of the Seas 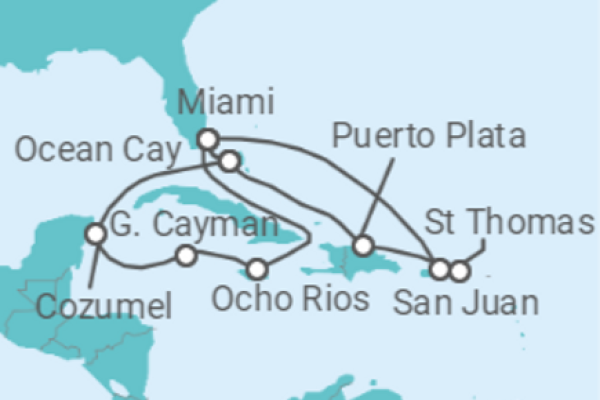 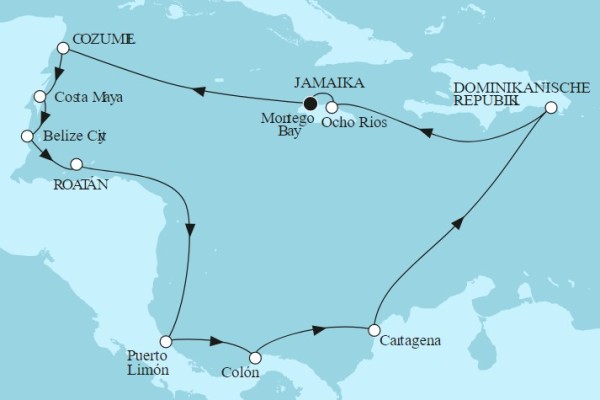 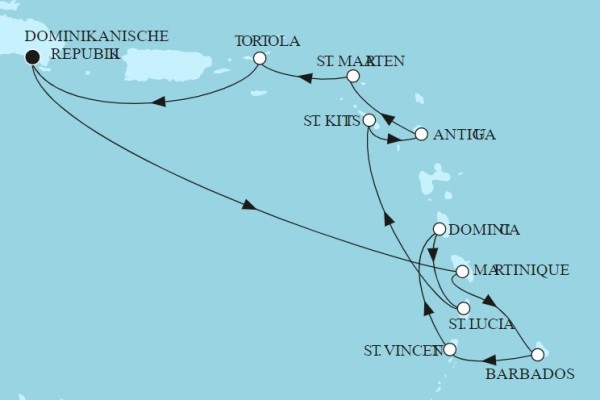 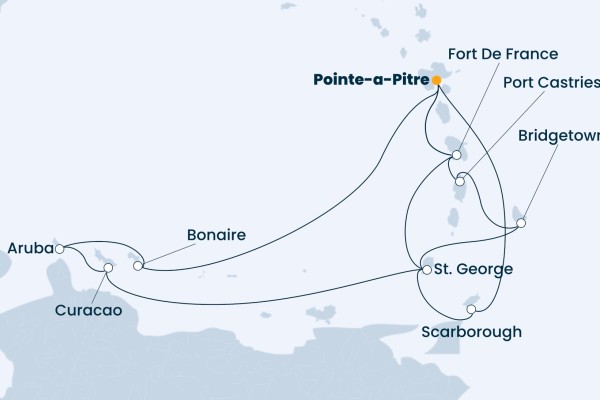 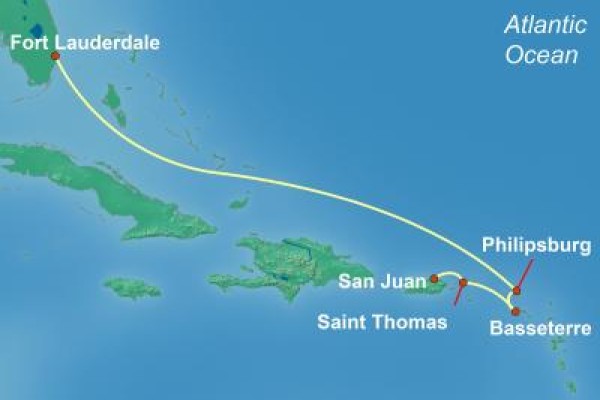 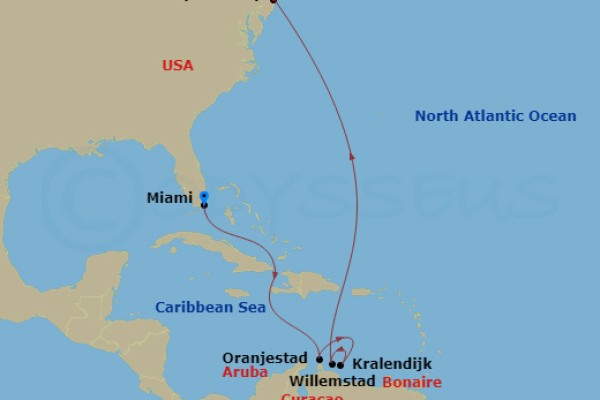 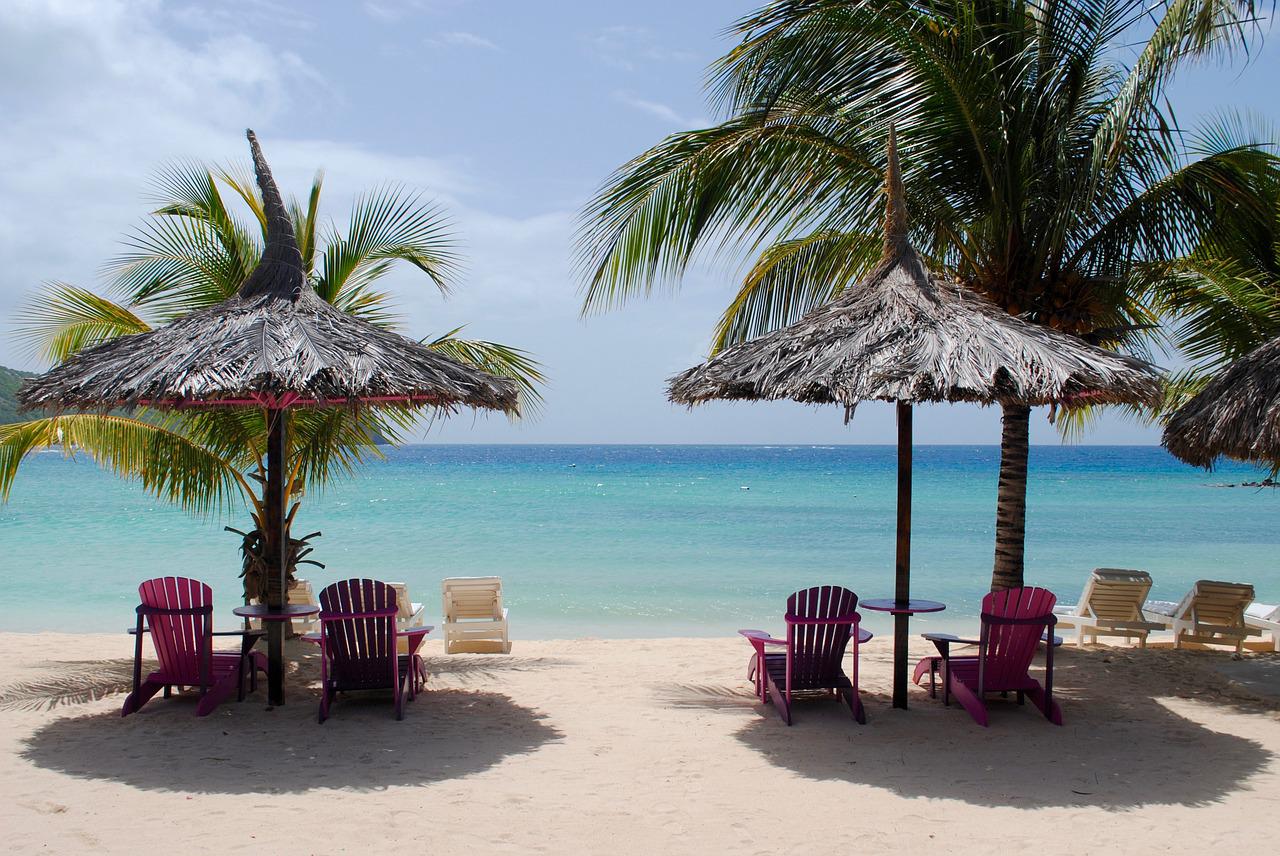 Most Caribbean cruises usually last from 7 to 14 nights.

When it is better to go on a cruise

Caribbean cruises are made all year round. Depending on the island, the climate may slightly vary, from moderate tropical to humid, but in general, the humidity on the Caribbean islands is quite high. Throughout the year, the temperature does not fall below +25 ° C. The best time for a cruise to this region is the period from November to April because it’s not rainy. The period from August to October represents the hurricane season in the Caribbean. Tropical storms and hurricanes are least likely to pass through the Southern Caribbean Islands, such as Aruba, Curacao, and Bonaire. Trinidad and Tobago suffers seldom from hurricanes as well. The Eastern Caribbean Islands are most at risk of them from mid-August to mid-September, whereas the Western Caribbean islands including Mexico and Belize can face this act of nature from mid-September to November.

Being on a cruise including visiting the Eastern Caribbean islands you can see one of the largest waterfalls of the Caribbean, the Trafalgar falls and the second largest lake in the world with visible volcanic activity, the Boiling Lake located on the Dominica Island. You have an opportunity to visit the world-famous Maho Beach, the main attraction of the island of Saint Martin, over which planes fly very low. You can also visit the Brimstone Hill Fortress, the military fort located on St. Kitts Island and included in the UNESCO World Heritage List in 1999. Visit the Balata Botanical Garden located on the Martinique island where plants from all over the world have been collected. Swim with turtles and visit the best beach on the island of Barbados, the Bottom Bay. The fans of the extreme kinds of sports will enjoy visiting the Grand Etang Forrest Reserve having a mountain trail to the Seven Sisters Falls, the waterfall located on the island of Grenada. Visit one of the most beautiful Caribbean islands, Saint Lucia, with its most significant sight, the Pythons, the mountains having regular cone-like shape, between which you can find the most beautiful beach on the island, called Sugar beach. Visit the largest fort in the Caribbean called Fort Louis Delgres located on the Basse-Terre Island. 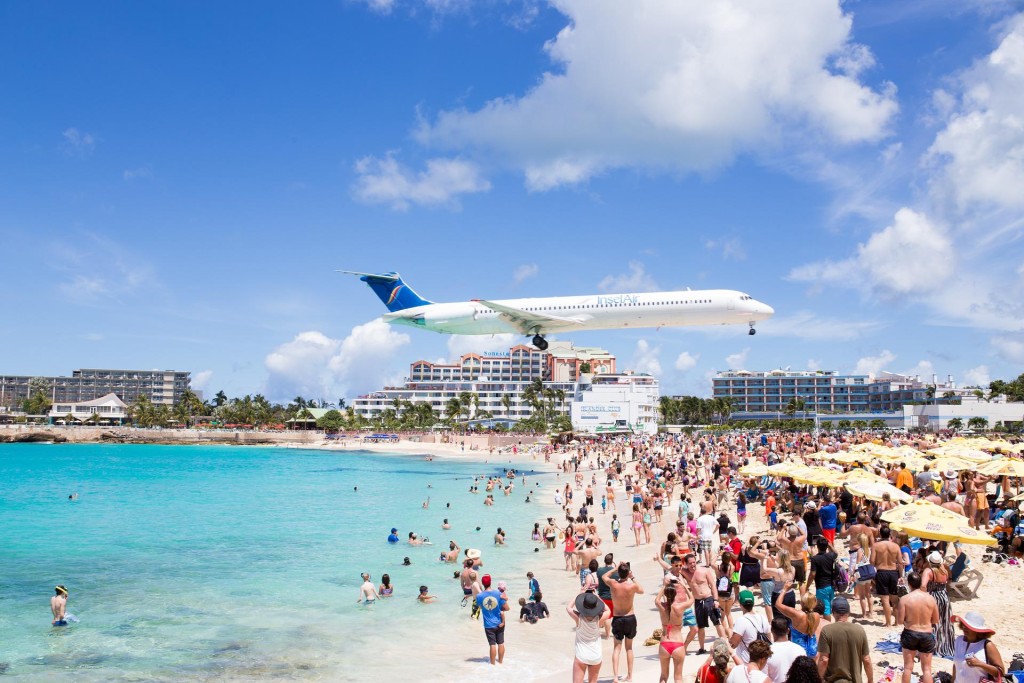 The island of Tortola is famous for its beautiful beaches stretching along the entire North Atlantic coast. There are two unique beaches, the Bath and the Devil’s beach on the Virgin Gorda Island famous for that is an hour away by ferry from it. They are remarkable having huge boulders located on them. You can see the same boulders only on the La Digue Island (Seychelles) and the Similan Islands (Thailand).

Being on a cruise including visiting the Southern Caribbean Islands you can attend the most beautiful city in the region of the Caribbean region, Willemstad, the capital of the Curacao Island. Its architecture reminds that of Holland and Denmark. You can also visit the Arikok National Park located on Aruba Island, very well-known for its caves, and enjoy the magnificent view from the Natural Bridge observation deck. 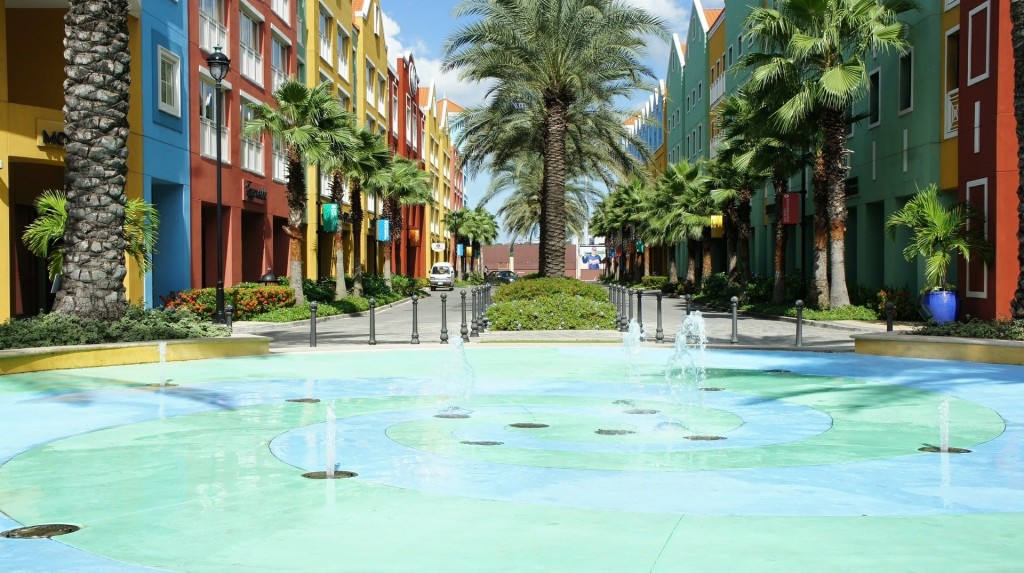 The cruise that includes visiting the Western Caribbean Islands allows you to swim with stingrays and attend the turtle farm on Grand Cayman Island. You can see the largest Bacardi rum factory in the world on the island of Puerto Rico. Visit the uninhabited Catalina Island discovered by Christopher Columbus in 1494, with beautiful white beaches located on the western side of it. Visit Altos de Chavon, the famous town of artists located on the island of Haiti near La Romana, and recreates the architecture of one of the Italian cities of the XV-XVI centuries. Explore the Green Grotto Caves and climb the Dunn Falls River in Jamaica. Visit Atlantis Paradise Island Resort, the best hotel on the Bahama Islands with a huge territory, an impressive aquarium, and a water park. If your cruise itinerary includes the island of St. John you are lucky because the beaches of this island are considered one of the most beautiful in the Caribbean region.

The cruise that includes visiting the countries of Central America will get you acquainted with the ancient Mayan cities, as well as the Discover Mexico Park located on the island of Cozumel, where the miniature landmarks of Mexico are collected. Go snorkeling, diving, kayaking, or swimming with dolphins during your visit to the Roatan Island.

In addition, going on a cruise to the Caribbean islands you have an opportunity to visit the private island owned by one of the cruise lines, which is equipped with the areas for a comfortable beach rest including numerous entertainments.